Structural engineers design the skeleton of a building, they ensure the building stands up and it’s safe for the public. However, good engineers bring a lot more to a project. They add value by enabling the structure to function more effectively while giving architects greater opportunities to expand their vision. “Structural Design it’s not just about the numbers,” affirmed Project Engineer Brendan Ramos, SE during a recent interview. “It’s using what we know about Structural Engineering and turning it into an art that is altogether aesthetically pleasing, safe, cost-effective, and buildable.” The recent renovation of Stage 6 at Sunset Bronson Studios required innovation, creativity, and teamwork. Sunset Bronson Studios is listed as a Los Angeles Historic-Cultural Landmark. To house KTLA Channel 5, Stage 6 went through a major upgrade designed by Bastien and Associates and Structural Focus. The 75-year-old building presented unique challenges for the design team. The biggest project challenge was the construction of two new “box-in-box” live broadcast studios within the existing building. These provide acoustical separation from other spaces within the building and from the exterior.

The team developed complex yet efficient and innovative solutions to minimize demolition of the floor and avoid extensive foundation excavations during the construction of the new studios. The original more conventional design concept required the removal of the floor below the new studio walls to reinforce them with strip footings. This scheme resulted in several high-cost construction items including the removal of the floor, deep soil excavation due to the depth of the native soil, and the undermining of existing adjacent pier footings. In order to limit the impact on the existing structure and to lower the construction cost, the Structural Focus team designed “upside-down suspended shear walls.” The studios were designed and constructed using cold-formed steel ceiling and shear wall framing, supported by steel beams and columns. The wall framing was vertically supported from the ceiling’s new structural steel beams using continuous light gage steel saddle track to avoid adding gravity loads on the existing raised floor framing. This creative design allowed for the construction of the box-in-box studios without impacting the building’s floor. Project Engineer Melineh Zomorrodian, SE explains the structural design below.

“The lateral force resisting system consisted of a plywood sheathed diaphragm spanning between the plywood sheathed “upside-down” shear walls on all sides of each studio. The steel collector beams at the top transfer the diaphragm shear loads to the inverted plywood sheathed shear wall and at the same time, those beams carry the weight of the walls below. At the base of the inverted shear wall, the shear load is transferred from the wall panels to a slip track at the bottom of the wall. The shear load is then transferred from the slip track to a continuous steel collector plate connected to the pile foundations at each end of the shear wall. In other words, although the shear walls are vertically supported at the top, the lateral shear is transferred at the base. 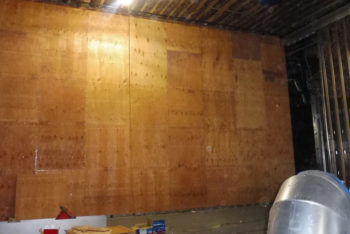 The shear capacity of conventional cast-in-place anchor bolts at the top of the piles would have been insufficient due to the minimal edge distance and constructability considerations, so a custom-designed shear lug was designed to make this connection. Steel collector plates located on top of the floor act as the code required “tie beams” to deliver the shear loads to the pile foundation.”

When Structural Focus first presented the new concept to the Los Angeles Department of Building and Safety, they were understandably skeptical. After explaining the difficulties with the construction of a more conventional design and how this new “upside-down” system worked, the design passed Plan Check with no structural comments. The renovation of Stage 6 does not only provide a high-performance state-of-the-art facility for KTLA Channel 5 but it extended the life of the historic building.