In 2012, Structural Focus joined the John Anson Ford Amphitheatre project team led by Brenda Levin of Levin & Associates Architects. The team embarked on the renovation and expansion of the historic 1931 venue. The project included the renovation of the historic John Anson Ford Amphitheatre and the construction of the new Ford Terrace, all within the current boundaries of the site tucked away in the hillside above the Cahuenga Pass. Principal Russell Kehl, SE and Project Engineer Melineh Zomorrodian, SE share their thoughts about the project’s unique structural challenges and how the team was able to successfully overcome them.

Challenge #1 Understanding the existing building layout and structure ⏤ The historic amphitheater is tucked in a canyon in the Cahuenga Pass, the site’s steep slope made the design very complex. We spent many hours on site trying to understand how the existing building structure fits in the topography. The concrete’s steel reinforcing was a mystery because no original building drawings were available for our use.

Challenge #2 Hillside retaining walls ⏤ The Canyon hillside is the backdrop for the John Anson Ford Amphitheatre stage. When we first looked at the project, there was a series of stone retaining walls that were failing. It quickly became clear that rebuilding the series of retaining walls was necessary and a significant amount of time was spent working with the contractor to come up with a design and layout that could be built on the challenging hillside site. 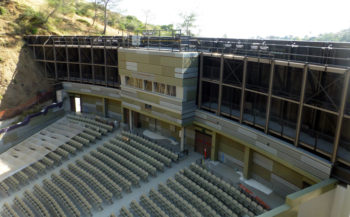 Challenge #3 Sound wall ⏤ A twenty-five-foot tall sound wall was added at the back of the amphitheater seating area to improve the acoustics of the venue and shield the theater from highway noise. The sound wall replaced a shorter existing wall that did not provide the acoustic isolation the new wall provides. Early in the design process, the decision was made to work with CST Covers, a design-build contractor, to design the sound wall out of aluminum. By using aluminum, the weight of the sound wall was reduced; but the large wall area and narrow depth created very large overturning forces due to the wind and seismic loads. Structural Focus designed a new structural steel support system to resolve the gravity and lateral loads at the base of the sound wall while coordinating with CST Covers’ Texas-based lead engineer. The new structural steel frames support the tall sound wall on an existing twelve foot tall historic concrete wall behind the seating area. The support columns penetrate through the promenade level and extend into the space below. The location of the columns above and below the promenade level was coordinated to avoid disrupting the existing concrete framing below the promenade. Without the as-built drawings and limited exploratory investigation, assumptions were made about the layout of the existing building foundations during design, but more coordination and modifications were required during construction.

Challenge #4 New building ⏤ Similar to the amphitheater, the new north building was also tucked into the hillside and the resulting lateral soil pressure was accounted for during the design. Due to the clearances required for truck access in the loading dock, the new column locations supporting the terrace slab and the depth of the beams below the terrace slab were limited and established very early in the design. The accelerated project schedule required the careful coordination of the depth of the footings supporting the north building and the new stair and elevator tower serving the amphitheater and the north building to avoid shoring and surcharge loading on the existing building.

Challenge #5 Building joint between existing amphitheater building and new building ⏤ The new building was designed to be structurally independent from the existing amphitheater building, but there were several locations where the two buildings touched and isolation joints where required. This included a slide bearing joint at an exterior stair and a joint between adjacent retaining walls.

Challenge #6 Tunnel to new building ⏤ With the addition of a new building on the north side of the amphitheater, a tunnel connecting the two buildings was designed. Careful coordination with the contractor was required to build the tunnel because it passed under some existing historic wall elements and required shoring and protection during the excavation process.

Challenge #7 New lighting towers ⏤ New forty-five foot tall cantilever lighting towers were added on the right and the left side of the amphitheater seating area. The height and design of the towers resulted in significant foundation reactions. During construction, it was determined that the elevation of the foundation for the house-left lighting tower could not be as low as it was originally designed because it would overload the existing retaining wall below. The area behind the existing wall was excavated and a new retaining wall was constructed at the lower level to support the surcharge loads from the new lighting tower foundation.

“We have had the pleasure of working with Brenda on several historic renovation and preservation projects,” stated Structural Focus Principal Russell Kehl, SE. “Brenda is amazing at collaborating with her project team to solve challenging constraints and deliver a wonderful project that will be enjoyed by many generations to come.” This month, the Ford will reopen as a state-of-the-art performance venue and cultural meeting place. In a recent interview with The Planning Report, architect Brenda Levin stated, “The Ford Theatres, for the first time in its 86-year history, has the capacity to be a competitor with any of the great venues in Los Angeles.”